Women's Voices from Asia and the Pacific

STANDING UP FOR HER RIGHTS 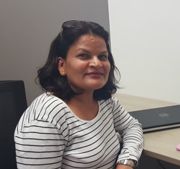 The 60th session of the Commission on the Status of Women is taking place at the United Nations Headquarters in New York from 14-24 March. It is an opportunity to review progress towards gender equality and the empowerment of women. The review theme is the elimination and prevention of all forms of violence against women and girls.

There are 1.7 million women living with HIV in Asia and the Pacific and gender-based violence is one of the contributors to HIV vulnerability.

Sita Shahi is a woman living with HIV from Nepal, who has recently moved to Bangkok to take up her new position as the Regional Coordinator for the International Community of Women living with HIV in Asia and the Pacific (ICW). Sita spoke to UNAIDS about her own journey from fear and despair to hope and self-empowerment.

UNAIDS: It is often a difficult decision to come out and openly declare one’s HIV-positive status. What made you decide to do this?

Sita: It took me a long time to disclose my HIV status publicly. I learnt I was HIV-positive in 2005 when my boy was only five months old. He frequently had pneumonia and was admitted to the hospital. He was in critical condition and the doctor tested his blood guessing it was HIV, and without consulting me he disclosed my son’s status to all the staff and others in the hospital.

My son ended up dying in my arms. I was already devastated and on top of that, I found out I was sick. I was referred to a hospital in Kathmandu and in the capital city I met a woman who was living with HIV and who helped other women like her through their journey. Her leadership encouraged me to do the same. The trouble I faced in the healthcare setting and the stigma in society made me want to do something so that other women like me would not go through what I did. So, I decided to disclose my status.

UNAIDS: Have you faced a lot of stigma and discrimination?

Sita: The biggest stigma and discrimination I faced was in the healthcare setting. My doctors disclosed my status without informing me. Not just to staff members, but also to the other patients sharing the same room. I was stigmatized even before I knew my own status. Everyone crowded around me and were saying things about me. I was so scared, I thought the police would come and arrest me because I had HIV. At that time, I had no information about the disease. I didn’t even know how HIV was transmitted. I was also discriminated by own family and neighbours. They accused me of being someone without character. Even later, when I gave birth to my daughter, the doctor did not even come for my delivery. They refused to put on my drip properly. It came out and I had to put it into my arm myself. It was so painful.

UNAIDS: However, I understand your husband has always been very supportive. How important has that been to you?

Sita: I cannot tell you the level of support my husband has given me from day one. I am so lucky. Even when my own family ignored me, my husband was there for me. We had a love marriage. I hope that all women who live with HIV have this kind of support. I would have not have made it, if not for him. I wouldn’t be in this position today.

My husband is also HIV positive although he has not openly disclosed his status, but because both of us are going through the same thing, it is easier for us. We are able to share with each other what we are going through. We understand each other. It is true that if a woman has HIV and her husband is not positive, it is very common that the man leaves. Yet, in Nepal, I’ve never come across a single case where a woman who is HIV negative has left her husband who is living with HIV.

UNAIDS: After those initial dark days, how did you turn your life around?

Sita: My husband’s support was most important. He brought me to the capital city for treatment. I started getting treatment and began working for the betterment of other women like me. I gathered a few women and started a community-based organization. I became a member of different organizations and became a steering member of ICW global.

One of my biggest ambitions was to continue my studies. But I got married young and without the support of my family, I could not continue my studies. I started working in the gender and health field and after a ten year gap I resumed by education. Just a few weeks ago, I completed my bachelor’s degree.

UNAIDS: What are some of the greatest challenges women living with HIV face?

Sita: I’d say my biggest struggle was financially. Without finances, one cannot get through this. The treatment and the access to proper nutrition is financially a big burden. I’ve seen lots of women struggling because of their lack of financial resources and many have died. Economic empowerment is what is most important for women living with HIV. A common problem for women living with HIV is that they often have to depend on their husbands or family members for support. It is a bigger issue with single women. In this region of the world, usually, if a man needs treatment, family members agree to support him but for a woman they will only do that as a last resort.

UNAIDS: So what do you think needs to be done to address this issue?

Sita: The most important thing is to empower women. They need to be made aware of their rights so that they can raise their voices and represent themselves at the policy making level. 60% of women from where I come from are unaware of their rights. Recently we had a workshop on forced sterilization here and a young girl from India only realized after the workshop that she was sterilized. She committed herself to reclaiming her rights when she returned home. Women who don’t know their rights cannot stand up for themselves.

UNAIDS: What are your immediate priorities for ICWAP for 2016?

Sita: Our immediate priorities are to deal with violence against women, women who face stigma and discrimination in the healthcare setting and also to focus on forced sterilizations. We also need to focus on sexual and reproductive rights. We need to work on empowering women at the country level by starting to educate them. We are also looking towards leadership development and capacity building of women living with HIV in the region by running workshops and courses for them. Social campaigns are being created for their awareness and at the same time we are collaborating with other partners to support these women.

UNAIDS: What kind of example do you want to set for your daughter?

Sita: I’ve written a diary ever since I was diagnosed. In case I’m not here someday, the diary has all of the things I wanted to teach her. I’m struggling in my life only to ensure that my daughter has a proper education. I want to teach her never to give up. No matter what happens in her life. She’s a great dancer, she loves to dance. I thought she would want to become a dancer but when I asked her what she wanted to become when she grew up she said she wanted to become a doctor. I was so proud of her. This is the legacy I want to leave for her, to follow her dreams and help as many people as she can.

Every woman needs to start with themselves. If a single woman stands up and starts to fight for her rights, people will begin supporting her. It is important for a woman to first and foremost empower herself and only then will things get better. Life is not over just because you are diagnosed with HIV. With proper treatment and support, a woman can live a normal life and have children. Don’t give up.

The Global 16 Days of Activism Campaign Against Gender-Based Violence Against Women, 2021. Awareness to Accountability

Voices from the Community

Link to Data Hub Section on Gender-based Violence and HIV

Resources at your fingertips